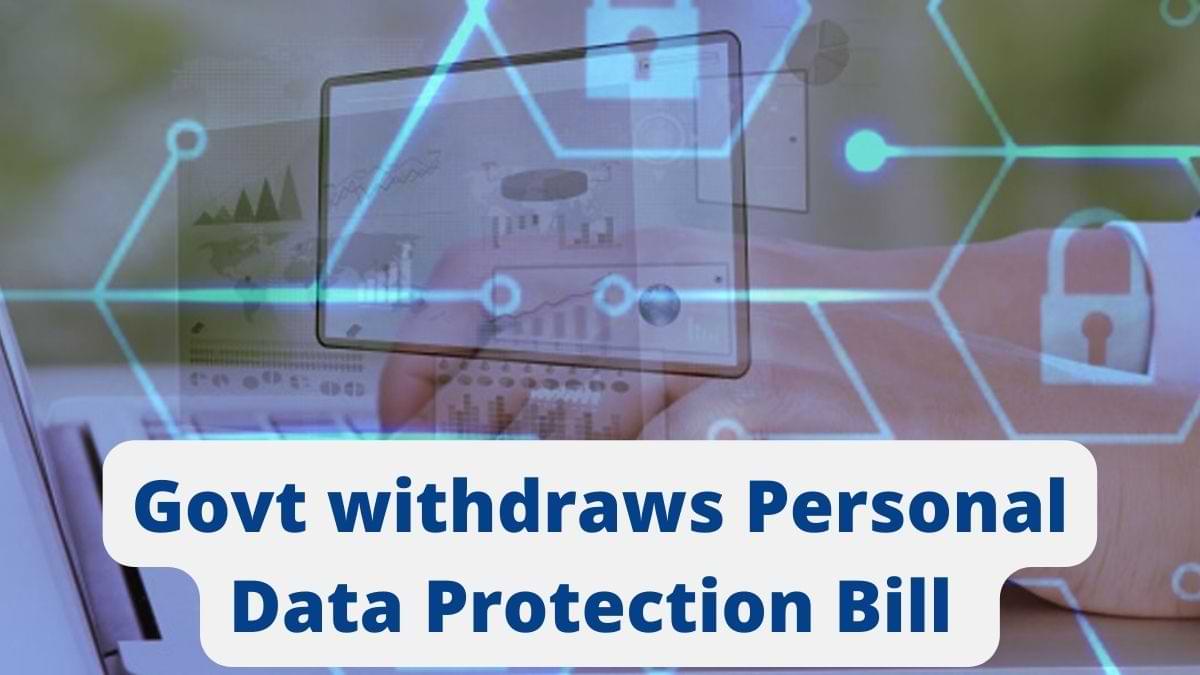 Personal Data Protection Bill Withdrawn: On 4th August 2022, the Union Government decided to withdraw the Personal Data Protection Bill 2022 from the Parliament. The withdrawal of the bill comes following 81 changes that were proposed to the Bill by the Parliament Panel after three years of deliberations. The Bill was introduced in 2019 and was aimed at regulating how personal information and digital data of citizens is used in the internet ecosystem by various stakeholders, including the government.

The formal announcement about the withdrawal of Personal Data Protection Bill was made by Union Minister for Electronics and Information Technology (MeitY) Ashwini Vaishnaw. While making the announcement, Mr Vaishnaw said that based on the multiple recommendations and changes proposed by the Parliamentary Committee, the government feels that a “comprehensive legal framework” to regulate the online space is required. He further added that the government may decided to introduce separate laws to mitigate use of Personal Data in the Digital Ecosystem including cybersecurity, telecom regulations, and harnessing non-personal data.

Most unfortunate Personal Data Protection Bill 2019 as amended by Joint Committee of Parliament is being withdrawn by Govt.For full two years during height of wave 1 & 2 of COVID-19 MP’s across parties worked to better it .Big Tech never wanted this Law. Big Tech won. India lost pic.twitter.com/fagKXXY3Hf

Why has the Personal Data Protection Bill been withdrawn?

The draft bill with the changes proposed by JPC had come under heavy criticism from different stakeholders within the society. Generally speaking, the critics of the bill have said that the draft bill was “too compliance” intensive and put a lot of onus on private companies and technology majors to manage and mitigate data protection and data privacy for Indian citizens.

Furthermore, the JPC had proposed 81 amendments and 12 recommendations to the draft bill which was submitted by the Srikrishna Committee, which will lead to comprehensive changes to proposed law. The official statement submitted by the Minister in this regards read ““Considering the report of the JCP, a comprehensive legal framework is being worked upon. Hence, in the circumstances, it is proposed to withdraw the Personal Data Protection Bill, 2019, and present a new bill that fits into the comprehensive legal framework.”

The withdrawal of the Personal Data Protection Bill by the Modi Governments comes following 4-years of deliberations on the law. The wheels to come-up with a law to regulate use of Digital Data of Citizens was set in motion in 2017, when Supreme Court of India had announced its verdict holding privacy is a fundamental right. The apex court, had also directed the government to come-up with a legal framework for data protection.