Five planets to align in rare planetary conjunction; How and Where to watch the celestial event? - Today Quizzes
Skip to content

Five planets to align in rare planetary conjunction; How and Where to watch the celestial event? 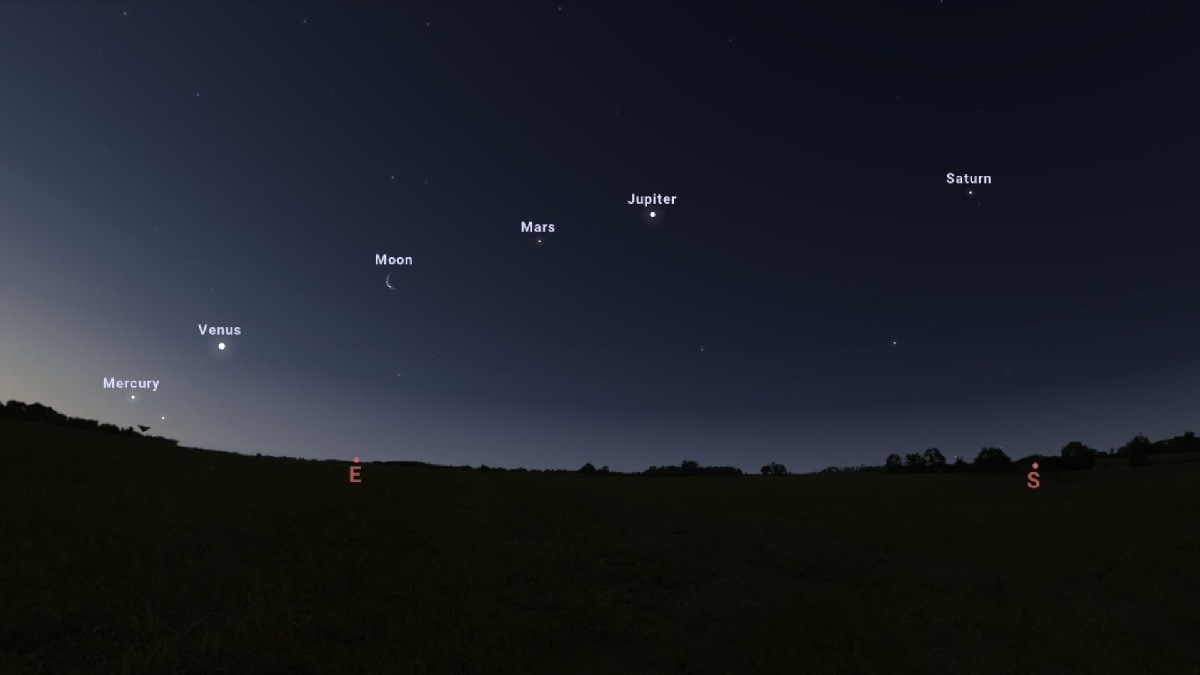 5 Planets Alignment 2022: Five major planets in our solar system will shine brightly in a straight line on June 24, 2022, during rare planetary conjunction. During the 5 planets alignment, if the sky is clear, the naked eye alone will be enough to see Mercury, Venus, Mars, Jupiter, and Saturn glowing before the dawn.

5 Planets alignment is also a rare event as Mercury will be visible which is usually obscured from the view by the Sun’s bright light. The last time the 5 planet conjunction had happened was in 2004 and the event won’t be seen again until 2040.

As per the Space Scientist and Chief Stargazer at the Society for Popular Astronomy Prof Lucie Green, the 5 planet alignment will look like a string of pearls spread out from close to the horizon.

🪐 Planets align. It’s fine. What is time? Does that even rhyme?

Look up starting tonight to see Venus, Mars, Jupiter, and Saturn spread out and appear to line up in the sky. The crescent moon joins them on June 23: https://t.co/36QwkIxfaw pic.twitter.com/uh5V9W2q45

5 Planets- Mercury, Venus, Mars, Jupiter and Saturn will align in rare planetary conjunction on June 24. As per the Sky & Telescope, stargazers across the world will be able to witness a rare celestial treat through the month of June 2022. The conjunction of two or three planets is a fairly common occurrence, however, being able to see 5 planet alignment at the same time is a rare event.

The alignment of 5 planets- Mercury, Venus, Mars, Jupiter and Saturn will occur in the morning of June 24. The conjunction of 5 planets can be best seen on June 24, however, it will remain visible until June 27 from most parts of the world.

The best time to see the planet alignment 2022 will be between 3.39 am and sunrise at 4.43 am on the morning of June 24, 2022. Saturn will lead out the parade, raising around 23.21 PM local time (June 23) for those in New York. The exact timing of the 5 planet alignment will vary depending on the specific locations.

Five Planet alignment: How to watch the celestial event?

Even though the celestial event of 5 planet alignment is visible from the naked eye, if you are someone who is at a place with poor weather conditions, the virtual telescope project is live-streaming the conjunction as seen through a telescope positioned in Rome. This means it could be live-streamed while staying at home.

The 5 planet conjunction can also be seen on the other days of the month. To watch the celestial event, you can wake up early before the sun rises and get an obstructed view of the horizon at the place where you can plan to witness the grand astronomical event.

Throughout June, Mercury, Venus, Mars, Jupiter, and Saturn have lined up from left to right in the southeastern sky, in their orbital order from the Sun.

Also, throughout June, the moon has embarked on a planetary meet and greet in the predawn sky first passing Saturn on June 18, then Jupiter on June 21, and Mars on June 22. The moon will also continue its tour in the coming days, passing Venus on June 26 and then ending its tour with Mercury on June 27.